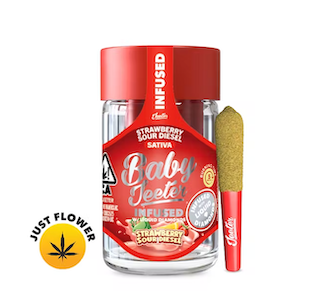 Jeeter
STRAWBERRY SOUR DIESEL "BABY JEETERS" 0.5G INFUSED PREROLLS (5-PACK
THC: 918mg
Sativa
These "dog walkers" are half gram prerolls, perfect for a stroll around the block or a quick solo sesh. Don't worry about wasting product, or having enough to share — these babies aren't meant for a big group. The jar fits nicely in your hand or pocket, offering you 5 unique experiences with some heavy loaded joints. They're small, but they bring the heat!

Sour Diesel, also known as "Sour D" and "Sour Deez," is a popular sativa marijuana strain made by crossing Chemdawg and Super Skunk. Sour Diesel effects are dreamy, cerebral, fast-acting and energizing. This strain features a pungent flavor profile that smells like diesel. Medical marijuana patients choose Sour Diesel to help relieve symptoms associated with depression, pain, and stress. Growers say this strain grows best in a dry, outdoor climate and has a flowering time of 77 days. Fun fact: Sour Diesel first became popular in the early 1990s and has been legendary ever since.