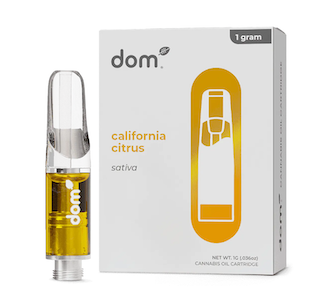 Dom pen
CALIFORNIA CITRUS - 1G CARTRIDGE
THC: 936mg
CBD: 2.6mg
Sativa
This bright and tangy premium oil disposable is flavorful and perfect for discreet, easy use. This fresh citrus triple-distilled designer blend is great for day-time use. ABOUT dompen: dompen has established itself as a leader in the all-in-one vaporizer category over the past decade, with growing sales across North America. With optimized airflow, clog-prevention technology, and a next-generation proprietary ceramic wick, dompen has been designed for performance. Additionally, with no buttons or charging necessary, dompen is an easy way to consume cannabis on the go, without hassle.

In 2015, DomPen was founded with a mission to de-stigmatize cannabis. After separately working in camera technology innovation and the burgeoning cannabis market in Colorado, founders Dom and Jake joined forces to create the original dompen prototype and moved to California. Very soon after relocating, they met the third co-founder, and Chief Manufacturing Officer, Ish, at a cannabis expo. The three entered into a year-long research and development effort, during which they developed efficient methods for THC distillation, developed their lab, designed the initial strain formulations, and laid out the framework for the dompen brand. We officially launched dompen in Los Angeles. Since the 2016 launch, the dompen team and product line has expanded and partnerships have been built with over 180 licensed retailers around California. dompen plans to continue to release innovative cannabis products, with a focus on new cannabinoids and better vaporization hardware.

$30
1.0 grams
Price per unit
This product is no longer available.
CARTRIDGE
energy