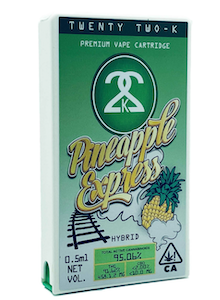 22k
PINEAPPLE EXPRESS - 1000MG CARTRIDGE
THC: 96.35%
THC: 931mg
Hybrid
According to actor and comedian Seth Rogen, the Pineapple Express cultivar didn’t exist until after the 2008 movie of the same name brought the name into the spotlight. Inspired by the film, growers took it upon themselves to create a potent cultivar that the film described as “the dopest dope.”
G13 Labs claims it originated the strain in the mid-2000s, selecting Trainwreck and Hawaiian as parent genetics, and the hybrid soon proliferated among California medical marijuana dispensaries. However, many growers and 11 seed banks each aimed to create the “true” Pineapple Express. As such, multiple variations exist in the current marketplace.

A small team local to the San Fernando Valley. Founded by two brothers who were working at a cannabis clinic. They were inspired by the relief cannabis provided their patients who were coping with diseases and conditions such as Parkinson’s disease, Fibromyalgia, Neuropathy, cancer, etc. They started TwentyTwo-K with the goal to provide patients with an option to discreetly medicate, on-the-go. The two created their first cannabis oil cartridge in 2014. TwentyTwo-K took part in educating the LA cannabis community by sharing the ‘in’s and out’s’ of the distillation process as a consulting company. Keeping in mind their original intent, when vape cartridges began to flood Los Angeles in 2017, TwentyTwo-K stayed true to a small, local team. The brothers commit their full attention to the process from farm to lab to patient, they remain hands on throughout. The batches remain small and artisanal. The team is always finding new terpene profile and cannabinoid combinations to explore. TwentyTwo-K has always been committed to providing customers with a safe discrete way to medicate on the go, while delivering high-quality cannabis oils with unique terpene profiles.